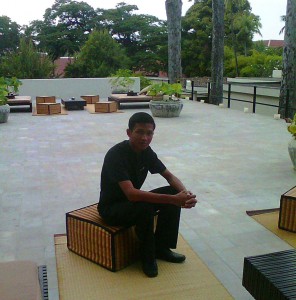 Sitting on the rooftop at his proud workplace, Amansara Resort, known as a 6****** star hotel/resort in Siem Reap, gateway to the rich cultural and natural heritages, Mr. Hak HIEN a former permanent active volunteer at Angkor Kids Center as teacher, HR, and Event coordinator, said he has just signed a contract with Amasara to be a permanent staff after his five months working on the casual employee ! Congratulation Hak !

Please be re-informed that Hak has been sponsored by Linkforaid to join a one year vocational training on restaurant and bar course at Paul Dubrule school 2013-2014, under the AKC Volunteer Reintegration Program. After successfully graduated from this school, Hak was offered a few job opportunities to different hotels and restaurants, and he took one. In August 2014, Hak made a evolution succeeding another job application at a Top hotel in Siem Reap, Amansara on a temporary contract in the Food & Beverage department including outside catering, room service, bar… With the existing experiences gained from the voluntary work  at AKC in the event coordination plus the attractive one year course, along with the curiosities and the talent which are part of his interpersonal skills, Hak was offered to sign a proper staff contract with his hotel. Please note that Hak is NOT the only one who are working on this casual basic, some already worked in their two or 4 years but stay still.

“Almost every time that I was called to sit in the office is to get some lesson, incredibly this week call-in is to sign a paper which have never ever expected to read and have it” Hak said. He also added that ” With the compensation that I am going to have from this job I feel relieve that I could carry my family much lighter than before“. Hak lost his father in 2013 in the middle of his course session year leaving him and three younger sisters who are at school and his mother that he has to take responsibility.

Even though, Hak is very busy at work, Hak always stay one of the active youth back at AKC and his communities to be grateful to this project! His next life project is going to the University here in Siem Reap !

Again thanks to the fabulous team of Linkforaid, a charity organization in Italy for making all these inspirational story happen !

Won’t this be a solution to help the unprivileged children to have the chance as others ! Talk to us now to find a way out of that and match best with your styles !