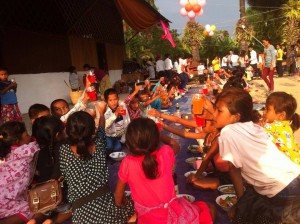 Today is the 3rd day and it is the last day of our glorious Khmer New Year Celebration ! In addition to the joy and the wonderful time that we have here at AKC as well as in Siem Reap where the biggest event, Angkor Sangkran is held, AKC would like to share with you some basic details of the KNY ceremony as follow :Khmer New YearThe Khmer New Year, or ‘Bon Chol Chhnam Thmei’ in the Khmer language, is commonly celebrated on 13th April each year although sometimes the holiday may fall on the 14th April in keeping with the Cambodian lunar calendar. This marks the end of the harvest season when farmers enjoy the fruits of their labor and relax before the start of the rainy season. The New Year holidays last for three days
During this time, people engage in traditional Khmer games; they paly such games as the Bas Angkunh ‘seed throwing’, Chaol Chhoung ‘twisted-scarf throwing’, Leak Kanséng ‘twisted-scarf hide’, tug of war, shuttlecock kicking, etc. Throughout the country, people merrily dance the traditional Khmer forms of the Ran Vong, Ram Kbach, Saravan, and Lam Leav in the open.

The First Day or Vara Maha Sankranta
The first day is known as Vara Maha Sankranta in Sanskrit. Khmer families still observe traditions and prepare elaborate festival paraphernalia. These include a pair of Bay Sey, a pair of Sla Thoa, five incense sticks, five candles, two bottles of perfume, five pieces of areca nuts, five betel leaves, drinks, traditional cakes, and various kinds of fruit to welcome the New Year divinity whose time of descent is foretold by a group of astrologers and announced over the radio and television. At the auspicious moment, families would light the incense sticks and candles, spray themselves and their possessions with perfume, chant prayers and pay homage to the divine. Radio stations usually play traditional Pin Peat music to add to the ambience, making it such a pietistic occasion.
Expression of Gratitude
Families usually get up very early on this day to cook and prepare food and desserts and together with other everyday-use items such as kormas, clothes, tooth brushes and paste, they bring these to offer to the monks at the temple for their own use and for them to further donate to the needy.
As an expression of gratitude, these are usually given in the names of their ancestors and dead family members.
At the temples, miniature tureens are lined on long tables in rows to let people symbolically make merits of offering. This is usually cooked rice and people will attempt to fill each and every of these tureens on the table, a spoonful each, performed as an act of humility and gratification.
These are later taken to be served to the monks and to visitors at the temple during lunch.

The Second Day of Vara Vata
This second day, the Vara Vata, is observed by acts of sharing, giving and the offering of alms. People would bring food, clothes, fruits and other stuffs to the temple to be distributed to the elderly, poor and less fortunate people.
Traditionally, it is imperative that everyone visits the temples at least once during Khmer New Year to perform such acts of benevolence.
Stupas – Valuka Cetiya
In temples, people erect sand hillocks on temple grounds known as “Voluka Cetiya.”
They mound up a big pointed hill of sand and dome in the center to represent sakyamuni satya, the stupa at Tavatimsa, where the hair and diadem of the Buddha are buried. The big stupa is surrounded by four small ones, each in one direction, north, south, east and west, to represent the stupas of the Buddha›s favorite disciples: Sariputta, Moggallana, Ananda, and Maha Kassapa.
In some regions in Cambodia, villagers build, inside the main temple building, stupas of rice grains instead of sand.

The Third Day – Vara Vaung Saka
Tngay Laung Saka, the third day of New Year, Buddhists cleanse the Buddha statues and their elders with perfumed water. Bathing the Buddha images is the symbol that water will be needed for all kinds of plants and creatures. It is also thought to be a kind deed that ushers longevity, good luck, happiness and prosperity in life. By bathing their grandparents and parents, children receive from them best wishes and good advice for the future.
Pithi Sraung Preah
The Khmer people’s observation of their culture and traditions are clearly demonstrated during the Khmer New Year celebrations.
They bath the Buddha statues, monks and their elders with perfumed water honoring them in a ritual known as Pithi Srang Preah.
Before the ban by law, the tradition of Sraung Preah can be hilarious. People pour water or liquid incense (a mixture of water with some fragrant powder) on one and other. This tradition is now banned to protect foreigners and people of other culture.

Traditional Khmer Games
Khmer traditional games that are played during the New Year, have their unique meanings and objectives besides being entertaining and for merriment.

All of the games have been created to edify the Cambodian youths and to help maintain their mental and physical dexterity. Through these games, Khmer adolescents are taught to unify, use intellectual power to overcome obstacles, empower justice, appreciate values of forgiveness, power of love, and other desirable ideologies.

Caol Choung
A game played especially on the first nightfall of the Khmer New Year by two groups of boys and girls. Each group comprises ten or twenty people, standing in two rows opposite each other. One group throws the ‹chhoung› to the other group. When it is caught, it will be rapidly thrown back to the first group. If someone is hit by the ‹chhoung,› the whole group must dance to get the ‹chhoung› back while the other group sings.
The songs apply affectionate terms, such as my darling or my baby, and sang in a teasing and provocative manner.
This game teaches unity and the power of love.

Teang Prot – Tug of War
Teagn Prot also known as Rain Game, is a tug-of-war game with teams of boys and girls pitting their strengths by pulling on the rope. Teagn Prot has a number of significant stories in Khmer culture, one of which extends into the mythical realm relating to the churning of the ocean of milk. In the myth, the giants and angels used a serpent named Vasuki as the rope to move and turn Montakrak Mountain. The angels pulled at the head of the serpent while the giants pulled at the tail. When turning, the serpent got dizzy and threw up the balk poison and breathed fire through its tongue. This created rain.
This game teaches team effort.

Leak Kanseng
This is a game played by a group of children seated in circle on the ground. Someone holding a ‘kanseng’ (Towel twisted into a round shape) walks around the circle singing along. The person walking secretly tries to place the ‘kanseng’ behind one of the children. The others in the circle cannot speak up but can hint to the victim. If that victim realizes what has happened, he or she must pick up the ‘kanseng’ and beat the person sitting next to him or her chasing him or her arond the circle.
This game teaches alertness and cooperation.

Donderm Sluk Chaue
This game is basically to compete for a short branch of leaves. The players with their numbers called, will compete to snatch the branch placed in the center and to take it back to their team avoiding being touched by the competing team member. The player who possesses the branch can drop it and be saved from being touched. But the player is not allowed to throw the branch except to drop it. The popular rule is that the player can only tap the other player bearing the same number. When a player gets touched or a player successfully steals the branch across the team marker, the round is over.
This game builds agility and cooperation.

Breaking The Pot (https://www.youtube.com/watch?v=UlwPe8VPh3g )
This is basically a blindfolded person with a long wooden bat trying to spot a clay pot filled with goodies (usually also contain loose powder) hung high in the air. A blind folded player is led a few meters from the hanging pot, spun around and taking instructions and directions from the surrounding crowd, he or she is guided towards the direction of the pot to try to break it with the bat. As the pot breaks, symbolizing the breaking of ill luck of the past year, good luck is released; goodies in the pot include cash and of course the powder which would fall out powdering the player’s face to the amusement of the crowd.
This game builds confidence and trust.

Khmer Dances ( https://www.youtube.com/watch?v=4_bnGkqr-e4 )
Urban folks and the people living in the coutry-side all enjoy to dance the traditional dances generally called the Ramvong, especially during Khmer New Year. People of all ranks and creeds participate in the dancing merrily together. Commonly called Ramvong, during New Year, dancing involves Ram khabach, the Saravan, the Lamliev, the Bruen, the Chuok Kampus, and the Taloung, just to name a few.
The dance ‘stage’ is usually arranged by placing a table with a big pot of colorful flowers in the center of the room.
The dancers move in pairs around the table. They dance forward and round the table until the rhythm stops.

The Trot Dance ( https://www.youtube.com/watch?v=smoVHIvGxs8 )
In recent years, the Trot Dance is becoming popular at New Year festivals.
It is usually performed before the New Year festivals.
The word Trot is from Sanskrit meaning to end and in this application, to put an end to the previous year.
During the Angkor era, the people of Somrae performed this dance for the king at New Year celebrations. The dance represents the ending of the old year and brings good luck and prosperity for the kingdom in the New Year.